The force of habit… Talking bollards… 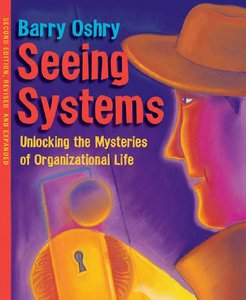 I first read Barry Oshry’s book, Seeing Systems, many years ago now. I was still a relatively young manager and found myself going through the depths of what I now call an ‘it shouldn’t be that way’ phase.

Shouldn’t Be That Way

At that time, almost everything anybody did around me seemed without merit. None of it made sense. We did the same dumb things year after year, experienced the same problems, and simply redoubled our efforts in response; as if energy and commitment was the only permissable response. It felt awful. And whilst many of my colleagues could be friendly, it was quite clear that turf-wars and behaving badly was considered the best way to navigate managerial waters and make a career. Open dialogue and inquiry leading to greater mutual understanding and recognition of new possibilities was virtually non-existent.

It took Barry Oshry’s book, among others, to affirm what my daily experience led me to suspect was just naive wishful thinking. Namely that, actually, it needn’t be that way at all. So much of what was going on around me, the poor performance, bad behaviour, and ongoing failure to learn was not how it had to be. There are better, healthier alternatives for organisations and those labouring within them.

Suffice to say, this ‘it needn’t be that way’ phase is a far healthier and productive place to find oneself in.

Back then, however, as I worked my way through those dark times, I came close to becoming a problem person in my organisation. A village idiot. Someone lacking all common sense. Someone who clearly doesn’t get it. This was the time when I first met Charlotte, with whom I now run NET2.

We both worked in the same organisation and found ourselves parts of a working group charged with leading the development of a new multi-agency, city-wide strategy. In the group, I frequently found myself asking difficult questions and picking away at the logic of suggestions. I was trying, to the best of my ability, to focus people on questions of purpose; not just what should we do, but why precisely. I fear that I wasn’t all that good at it and my clumsy efforts were viewed very negatively. Certainly, years later, when our paths crossed again, one of the first things Charlotte said to me was, ‘I get it now, what you were doing. At the time, I just thought you were being awkward.’ Indeed.

And here’s the thing, even during my worst moments, I never wanted to be awkward. No matter how angry and dissillusioned I felt, I wanted to do the right thing and, naturally, do it well. I’m sure everyone else felt pretty much the same way. It’s just that I didn’t agree with them on what the right thing would be. That’s why, when I read Seeing Systems, Oshry’s insights made real sense.

One story in particular has stayed with me. You’ll see why.

Immigrant Martha Has a Breakdown

In Chapter 48, Oshry describes an incident from a residential workshop, called the Power Lab. A group of people, Immigrants, at the bottom of the hierarchy in the simulation exercise, were discussing the sequence of events in the run up to one of their number, Martha, having a very public emotional meltdown then becoming ‘apathetic, listless and depressed’. Skilfully, with artful facilitation, members of the group were taken through an analysis, step by step, of each decision they had collectively made in relation to the issue that ultimately left Martha in such a bad place. Decision by decision, members of the group were invited to say where they had stood, what they had thought was the best course of action and how strongly they had felt that way. Time after time the group had been pretty much evenly split, with varying degrees of strength of opinion. Certainly, no one person was isolated in their viewpoint. Until, all of a sudden, at Decision 8, it became clear that everyone except Martha had wanted to pursue one particular path; cooperation with those at the top of the hierarchy. That had been the end for Martha. She’d totally disagreed. And from that point on she’d been out of step. She’d tried to make her points, but no one was listening anymore. It wasn’t long before she’d blown up, then withdrawn.

Oshry describes how this process of systematic reflection and the sequence of events it revealed unleashed ‘an explosion of energy’ in the room. Martha came back to life. The outcome of all those decisions hadn’t changed. She’d still lost. ‘All that had happened,’ Oshry writes, ‘was “seeing”. But what a difference this “seeing” made.’ Everyone who had watched the deliberations, not only the Immigrants, experienced a similar shift in their energy. Something had happened that happens all too infrequently. It was, as Oshry puts it:

A “mutant moment” that illuminates a new possibility in which each of us “swimmers” sees the Swim itself and how the nature of the Swim has shaped our consciousness.”

And as one of her colleagues noted, one of her fiercest critics as events had unfolded, any single one of them could have ended up in Martha’s shoes. Experienced as, and openly labelled, a problem. For me, reading it all those years ago, in the midst of my workplace struggles, this story made a huge impression. I longed for such a ‘mutant moment’. Sadly, it was not to be.

Now, many years later, I’m looking forward to taking part later this month in Oshry’s Organisation Workshop, run by John Watters, here in my home city of York. (Find out more here, if you’re interested.) I wonder what possiblities it will reveal for all involved. And I look forward to taking the lessons and applying them out in the world to usher in more mutant moments that unlock understanding and energy in equal measure. Because, no matter how bad it gets, I know for sure, it needn’t be that way.

[You can read extracts from the relevant chapter in Seeing Systems here including, on pages 169-171, the process Oshry used to unlock the “seeing” he describes.]