Now That’s What I Call Quite Clean 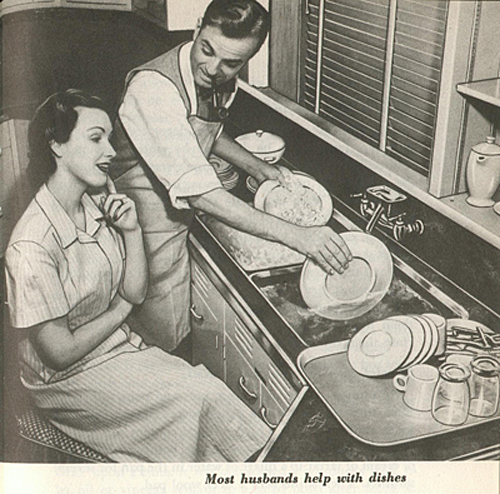 In every dream home, not a heart-ache, but a dishwasher. It wasn’t ever thus, as listeners to Radio 4’s Woman’s Hour will know. Whilst its place in our (well mostly women’s) liberation from domestic drudgery went without saying, the programme wanted to remind us that doing the dishes by hand wasn’t all bad. In the studio there was a heated debate: in our rush to save labour had we inadvertently lost one of the communal joys of family life?

It all conjured up in listeners’ minds scenes of domestic bliss. This image was shattered when Charlotte, my fellow NET2 convenor, reminisced about her pre-dishwaher days before leaving home. She told me that her dad used to say to the dryer who had complained about food and suds on the plates after he had (supposedly) washed up –   “it’s better than when it went in!” Dads, eh? They have an answer for everything.

How much better would it have been if the voice of the willing workers with the tea towels had really counted? All concerned could have shared their views on what clean looked like and agreed how they would work together to do what mattered to those who would be using the pots and pans next. That should have been easy enough, she doesn’t come from a big family. But what about in the real world of work where there are usually many more people involved and not usually all in the same room? How do they ever get to a shared view on their equivalent of ‘what clean looks like’? And when they do, what are the chances they’ll be capable of pulling off the delivery of it?

Charlotte is convinced that it’s all perfectly possible, though not necessarily easy to do. She has just finished editing a book in which the various contributors gave short shrift to her Dad’s slipshod ways. They didn’t do it to get at him, you understand. It’s just that, in one way or another, they all decided that the ‘and this is as good as it gets’ attitude was not for them. The book is chock full of stories from across the (Eng)land about the wonders done in such essential services as Fire and Rescue, Food Safety, hospital care of stroke patients, Advice on Legal and Social Welfare Problems and even Health and Social Care, where the bad news seems to come thick and fast.

If you can make it to our next meeting on 24 May you will get a chance to hear from one of the book’s authors, Simon Guilfoyle. Don’t be put off if you don’t work, like him, in the police service. You’ll learn lots about what you can do (and not do) if it feels like you’re swimming against the traditional tide of doing things. Whatever your level of authority, if you are, or want to be, a leader introducing change then it’s likely, as Machiavelli said, that you will have as “enemies all those who are well off under the existing order of things, and only lukewarm supporters in those who might be better off under the new”.

Charlotte will be there too with copies of the new book at a very special price! Come and see her have the last laugh. Ha!